Have you ever wondered what a blue French Bulldog is all about? Are you interested in learning more about this unique dog breed? In this blog, Blue French Bulldog: Facts, Breed Information & Health Issues, we’ll discuss all things blue french bulldogs, from their history to breed standards and health concerns.

So whether you’re looking to buy a puppy or are just curious, we hope you find everything you need here!

What is a Blue French Bulldog?

A blue French Bulldog is one of the color variations found in the Frenchie.

French Bulldogs come in various colors and coat types, but blue is undoubtedly one of the more eye-catching varieties.

These dogs have a loving demeanor and are among the most popular French Bulldogs breeds.

Like all French Bulldogs, blue French Bulldogs are vulnerable to health problems. Breathing difficulties, hip dysplasia, and seizures are just a few.

The History of the Blue French Bulldog

Like other colored Frenchies, the breed originated in England as a toy-sized bulldog. With the Industrial Revolution came a migration from England to Northern France, and the Frenchie was brought to France with their owners.

Over the years, the toy Bulldogs were crossed with what is thought to be terriers and pugs, and their now-famous bat ears were developed.

Frenchies became popular all over Europe and America by the end of the nineteenth century.

When you think of blue Frenchie, it may conjure up images of a Frenchie, the color of the ocean, or the blue in the sky. This may surprise you, but blue Frenchies are more of a slate or grey color.

They actually come in various hues, ranging from near-black to dark grey and light grey. As a puppy, it can be challenging to determine if the Frenchie is blue; however, it should be evident that the nose is blue.

The eyes of blue French Bulldogs are usually blue or light blue though as a puppy grows, the blue eyes may become brown.

There are a few color variations found in the blue Frenchie

The Temperament of the Blue French Bulldog

French Bulldogs’ gentle and loving nature is well-known, making them wonderful family dogs. They also enjoy being around other animals.

With the high-energy this breed exhibits, it’s important to give these pups both physical and mental stimulation to help curtail boredom and destructive behavior. By socializing and providing plenty of playtime they will eventually calm down.

To Read More About The Temperament of Frenchies, See: The French Bulldog and Behavior

If you’re thinking about adding a Frenchie to your family, it’s essential to know what kind of health risks they may face so that you can take appropriate precautions.

Some health problems are common in French Bulldogs. Epilepsy, hip dysplasia, and respiratory difficulties are the most common issues.

It’s important to know that the French Bulldog being a flat-face breed, is at risk for Brachycephalic Syndrome. Frenchies can become overheated quickly and are at risk of heatstroke.

It’s important to note that not all blue Frenchies will develop CDA, but if they do, It is relatively easy to manage with the help of a vet.

If you observe any concerning signs in your Frenchie, consult with a veterinarian. In the meanwhile, to avoid health concerns in the future, be proactive about your dog’s well-being and exercise them regularly.

In comparison to their female counterparts, male blue French Bulldogs are usually more muscular and larger. Their coats may also be somewhat darker than those of females.

French Bulldogs, in general, are between 11 and 13 inches tall and weigh under 28 pounds.

The life expectancy of a Frenchie is between 10 and 12 years.

Is the blue Frenchie recognized by the AKC? 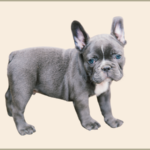 The American Kennel Club (AKC) does not recognize the blue Frenchie when it comes to breeding standards, despite its beauty.

That doesn’t indicate the dog isn’t lovely or has a wonderful personality; it simply means that the color isn’t recognized.

Yes, the blue Frenchie is one of the rarest colors available in the breed. Because of this, they can also be quite pricey.

How Big Does A French Bulldog Get?

Well, there you have it. The blue french bulldogs are just as adorable and energetic as their other French Bulldog relatives.

They do come with some potential health issues, so it’s essential to have regular vet visits and know of the possible added expense.

With a friendly, loving, and playful personality, they have become one of the most desired breeds to own.

If you are considering purchasing a blue French Bulldog, be sure to contact a reputable breeder.

Thank you for reading Blue French Bulldog: Facts, Breed Information & Health Issues, and I hope you found it helpful.

What are your thoughts about the blue French Bulldog? Please comment below.

The 5 Best Calming Beds for Dogs: Reviews and Ratings

GPS Dog Collars: What You Need To Know Before Buying One