What Is an American Bulldog? Everything You Need to Know

If you’re looking for a loyal and loving companion, then you should consider an American Bulldog! These dogs are known for their tough exterior, sweet nature and are perfect for those who want a dog that will stand by them through thick and thin. In this post, What Is an American Bulldog? we’ll give you everything you need to know about these adorable dogs, from their history, physical characteristics, temperament, care needed, to their personality traits. Ready to add an American Bulldog to your family? Let’s get started!

The History of the American Bulldog

American Bulldogs are descended from the Old English Bulldog and were brought to America from England.

They were most likely introduced to America in the 1880s when immigrants brought their working bulldogs with them. American Bulldogs soon became popular in the United States as working dogs.

This versatile working dog was used by small farmers and ranchers for a variety of duties, including farm guardians, stock dogs, and catch dogs. Because of its capacity to bring down and capture feral pigs, the breed largely persisted, particularly in the southern United States.

During World War I and World War II, the breed nearly went extinct, with just a few surviving canines retained on farms in the southeast. Breeders John D. Johnson and Alan Scott. are the two men most associated with resurrecting the breed from extinction.

Today, the American Bulldog is a popular breed not only in North America but also worldwide.

You May Also Be Interested In Bulldog Breeds – The Ultimate Guide

Two types of American Bulldogs came about from the efforts of the two gentlemen that revived the breed, breeders John D. Johnson and Alan Scott.

The Johnson type of Bulldog is known as the Classic and also known as Bully. This breed strain was created when John Johnson crossed his bulldogs with English Bulldogs from the North.

The Scott type of Bulldog is known as the Standard type. This strain of the breed was brought about when Scott bred Johnson lines of Bulldogs with non-Johnson Bulldogs of the working farms in the South.

What Are The Physical Characteristics of An American Bulldog? 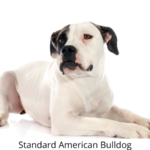 The American Bulldog is a medium-sized dog with a muscular body with a life span expectancy of 10-12 years.

The average height of the American Bulldog male is 22-25 inches, and the average female is 20-23 inches.

A distinction between the Bully and Standard breed is the Bully is a larger dog with a shorter muzzle, whereas, the Standard is smaller and has a longer muzzle than the Bully.

The American Bulldog has a short, smooth coat, coming in various colors, including black, brown, brindle, tan, and white.

The American Bulldog is a loyal and courageous breed that loves to play games such as fetch and tug-of-war.

Some of the common personality traits of this breed include being brave, friendly, affectionate, and loyal to their family members and friends.

Typically they are gentle and easy to handle and train, making them a good choice as a family pet.

American Bulldogs are usually good with kids, but like all dogs, they should be supervised when around them.

As bulldogs are athletic dogs, they make great guard dogs and can be very protective of their owners. This means it’s important that the American bulldog puppy early socialization from a young age so that it is able to get along with other animals and people.

The more training practices given the American Bulldog, the more likely the success of being managed inside and outside their environment.

American Bulldogs are also known for being very active – which means they need plenty of exercise.

Care To Provide The American Bulldog

One of the most important steps you want to take in the care of the American Bulldog is ensuring they get enough exercise. If they don’t, they can resort to unwanted behavior. The American bulldog needs to be mentally and physically stimulated; exercise is a way to provide this and avoid boredom.

Aside from exercise the American Bulldog’s care is pretty simple.

Be prepared – bulldogs are known to be droolers – it’s just part of the makeup. You will probably need to wipe their drool off.

Some owners have their bulldogs wear a bandana. But be aware of the fit so the dog isn’t in danger of the bandana getting caught on something and choking.

As advised by their veterinarian, owners should maintain a vaccination and examination schedule.

American Bulldogs, as well as the Old English Bulldogs, are one of the healthier choices among dog breeds. Because of their low rates of major illnesses and injuries, they are a good choice for both new and experienced dog owners.

However, American Bulldogs, like all other dogs, do have the potential to develop genetic health problems. The good news is that there is genetic testing that the breeder can use that can tell if the breeding dog has certain genetic markers that increase the likelihood of certain disorders.

Because of these possible genetic health issues, it’s important to go to a reputable breeder that conducts all health screening recommended by the OFA (Orthopedic Foundation for Animals).

Ask for all available health information if you’re adopting through an American bulldog rescue.

These three maladies are the three most commonly found in American Bulldogs. Having said that, your dog may suffer from other health conditions. If you notice any abnormal symptoms in your pup, it’s important to take them to the veterinarian for a check-up as soon as possible.

You May Also Be Interested In Read: The White French Bulldog

Should You Microchip Your Dog?

Dehydration and Dogs: The Symptoms and The Treatment

Are Bulldogs Aggressive? The Truth Behind This Myth

In this blog, What is an American Bulldog, we have explored the American Bulldog breed. From its history to its temperament and more, you now have a better understanding of this beloved breed!

We hope that you have found this informative and that you will be able to make an informed decision when it comes to getting an American Bulldog as your new pet!

What is it that intrigues you the most about the American Bulldog? Please comment below.

Should You Microchip Your Dog? Pros, Cons, And FAQs

Is My Dog Sick? 10 Signs and Symptoms of a Sick Dog