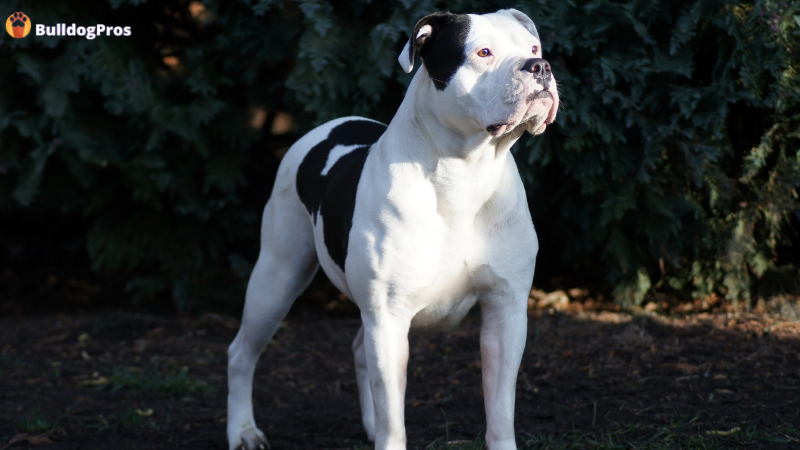 Are you in search of the perfect dog breed for your family? Are you considering becoming a part of the bulldog owners club? If so, you may consider getting an Olde English Bulldogge (Old English Bulldog). What is this breed of dog, and why is it such a popular choice? In this blog post, What Is An Old English Bulldog: History, Temperament, & Care, we’ll discuss all you need to know about this bulldog breed, from its origins to its temperament and needed care.

We’ll also go over some of the health concerns that may be relevant to you and provide tips on grooming and caring for Olde English Bulldogges. So go ahead and read on to learn everything you need to know about this beautiful bulldog breed!

History Of The Olde English Bulldogge

From about 1100 until 1835, Bulldog breeds were developed for the English sport of bull-baiting. The sport had become illegal by the middle of the 1800s, and the athletic Bulldog started to vanish.

Because this once lively, athletic, and happy breed was only saved for the conformation venue (purebred dog competition), selective breeding for appearance severely compromised the health and lifespan of this Bulldog.

In the 1970s, a dog breeder from Coatesville, Pennsylvania, by the name of David Leavitt, aspired to reproduce a Bulldog with the looks, health, and speed of the 18th Century Bulldog.

To quickly achieve his goal, Leavitt modeled his program after a livestock line breeding scheme developed by Nathan Fecheimer (Fechimer), an Ohio State University professor. The outcome was a healthier athletic breed that resembles the Bulldogs of the 1820s but has a friendly demeanor and a lifespan extending into the teens.

On January 1, 2014, the Olde English Bulldogges were recognized by the United Kennel Club.

What Are The Physical Characteristics of An Olde English Bulldogge? 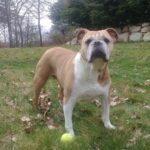 Known for its characteristic square head and barrel chest, this medium-sized dog is larger than the English Bulldog.

The most common colors of the Old English Bulldogge is white, brindle, red, or black. Their short coat makes them relatively easy to keep groomed.

The life expectancy of Olde English Bulldogges is anywhere from 11 – 13 years.

Make sure you have a solid understanding of this breed’s temperament and character before making the decision to bring one home.

This bulldog breed is known for its thick coat, hearty personality, and bulldog-like face. The Olde English Bulldogge is considered a kind-hearted canine who make great friends and loyal companions.

Though originally bred for bull baiting, modern Old English Bulldogs, with their gentle temperament, being playful and affectionate, make them an excellent family member.

However, this breed should not be taken lightly as they can become defensive if threatened or aggressed against.

As with all breeds, proper training is essential to ensure that the Old English Bulldog is well-mannered and behaves in all situations.

You May Also Be Interested In Read: The White French Bulldog

Olde English Bulldogges tend to have fewer health problems and don’t usually have the breathing problems seen in their English Bulldog counterparts; however, it is important to be aware of their genetic predispositions before getting one.

What Is Hip Dysplasia

A congenital disorder that affects the hip joint. The ball and socket joint in your dog’s hip are not lined correctly, which can lead to discomfort, arthritis, lameness, and even restricted movement of the hind legs.

A hereditary condition usually affecting larger dogs, but it can affect all dogs. Excess growth rate, different types of exercise, incorrect weight, and inadequate nutrition might all exacerbate this hereditary predisposition.

According to the American Kennel Club (AKC), symptoms are many, including:

Bloat is a life-threatening emergency that can occur in any type of dog and typically affects large, deep-chested breeds such as Bulldogs. Bloat occurs due to gas, fluid, or air buildup in the stomach.

Eating too quickly, eating too much, overexercising, overexcitement, or eating a meal right after a vigorous play or exercise session may all trigger bloat.

If you notice any of these symptoms, go immediately to the nearest emergency veterinary clinic. Without early intervention, bloat can be fatal.

Care of The Olde English Bulldog

You should feed your Old English Bulldog a high-quality dog food designed explicitly for bulldogs. Don’t forget to provide plenty of fresh water to drink.

They also require plenty of exercise – at least an hour per day – and should not be left alone for long periods of time.

As a breed larger than other Bulldogs, ensure you have enough space in your home for an Old English Bulldog.

Proper grooming includes brushing their teeth twice a week and trimming their nails every four to six weeks.

Keep in mind that this breed is known to be resistant to certain allergies, so consult your vet before starting any dog-related grooming regimen.

What Is an American Bulldog?

The Olde English Bulldogge is an old breed with a distinguished history. Today this friendly dog has flourished in popularity among pet lovers who adore its gentle nature and outgoing personality.

With its loving, affectionate, loyal character, it can be a wonderful family pet.

However, like many other dogs, this breed may suffer from certain medical issues, so be sure your pup gets the best veterinary treatment available to remain healthy throughout his life.

Thank you for stopping by and reading, What Is An Olde English Bulldogge. I hope you found it helpful.

What are your thoughts about Olde English Bulldogges? Please comment below.