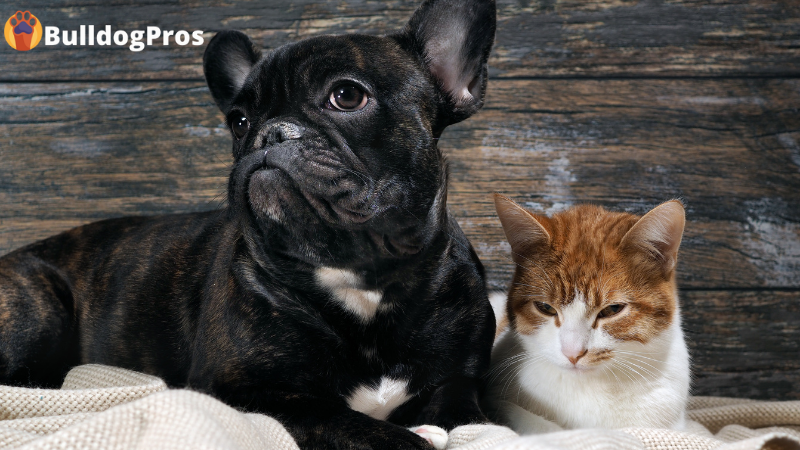 Do you have a French Bulldog or a Cat? If you’re thinking about getting one of these furry friends, you might be wondering if they get along. As it turns out, the answer is yes – but it’s not always easy. You need to know a few key things if you want your French Bulldog or Cat to get along with each other. Read on with French Bulldogs And Cats – Do They Get Along to learn more!

Are French Bulldogs Good With Cats? 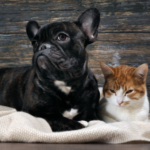 It’s a common misconception that French Bulldogs (Frenchies) and cats don’t cohabitate well. There’s no reason your French Bulldog can’t get along with your cat. Like with other breeds, whether or not your Frenchie will get along well with your favorite feline is a matter of pet personality.

Pet temperament can vary from breed to breed, but it can also vary within a particular breed. This is true of French Bulldogs, some of whom may interact perfectly with your cat while others do not.

Besides pet temperament, there are other considerations when deciding if your Feline/Frenchie duo are burgeoning best friends.

First and foremost, let’s not forget to consider the cat’s temperament. Indeed, you’ll want to be sure that both your cat and canine are up to the challenge.

Beyond that, the foremost consideration for pet owners to make before bringing the two together is to consider how to have them interact safely and the owner having the confidence to introduce their pets.

How To Introduce Your French Bulldog To A Cat

An adult dog can learn to get along with cats, but not as well as a puppy. So if you have a French Bulldog puppy you will probably have an easier time than if you have an adult dog. But with patience and perseverance, both can be done.

You’ll want to be sure to introduce your new family member, Frenchie puppy or dog, and cat slowly and with a few safeguards in place. There are a few ways this can be done, but below I’ll share a tried and true introduction model:

There’s no way of knowing how the first meeting will go, so keeping them in a controlled environment even in separate rooms will ensure the safety of both pets. One way to do this is by using a crate to isolate the Frenchie while allowing the cat to explore around the crate and its contents leisurely. Once it appears they will accept each other’s presence it’s time for the next step.

Be sure to avoid having the first meeting between your French Bulldog and their cat companion at feeding time or in the presence of food. It’s best to continue having their eating areas separated. Food aggression could spark contention between the two, so minimizing distractions like food is important.

Supervise the pets for a few days until you feel confident that they can be left alone together without cause for concern.

Use positive reinforcement such as using praise or a reward for good behavior.

Give both pets individual attention.

Allow your pets to have alone time if they become annoyed by the other. This will more likely look like the cat needing a break from a playful French Bulldog.

A hissing or lunging cat and a growling bulldog are sure signs of discontent. If lunging or fighting begins, it could be time for a timeout where you separate them and give them their own space for a little while.

Also, changes in appetite or bathroom habits could mean one or both of your pets is stressed.

Know the signs and remediate them when necessary.

Tips For Introducing Your French Bulldog To A Cat

Keep eating areas separate from each other. As previously noted, food can often be a point of contention for animals. French Bulldogs will eat anything, including cat food, so protect your cat’s food by keeping your pooch away from the cat at mealtimes. You could feed them in separate spaces or at different times to limit possible quarrels.

Make sure your French Bulldog is getting plenty of exercise. Frenchies are naturally playful and excitable. By making sure your pooch is well-exercised, they will be less inclined to play with your cat aggressively.

Always use a leash. Keeping your Frenchie’s leash on, even when just hanging around the house, gives you the ability to control your dog as needed. It’s much easier to catch and control a leashed dog than an unleashed dog on the loose.

Be aware of body language. A playful gesture from your Frenchie may be misinterpreted as aggression by your cat and vice versa. A physical attack by one or the other could result in serious injury or worse.

Knowing that your pets may interpret each other’s body language differently and being present and focused when the two are together will allow you to quickly intervene in the event of discord.

As your Frenchie and cat become acclimated to one another, you can slowly increase the amount of time the two spend together. Moving slowly and using cues from your pets will let you know if the two can handle more time with one another.

What To Do If Things Get Out Of Hand

Because you’ll have your French Bulldog on a leash, you’ll always be able to gain control of your dog quickly. Should a quarrelsome situation arise between your pets, grab the dog’s leash and redirect them.

Separate the cat and dog until they’ve had a chance to calm down. Waiting for excitement or tempers to cool may only take a few minutes but could be as long as an hour or more. Be patient; it’s a process.

Without forcing things, reintroduce your pets in a neutral space.

If you are having trouble having your pets interact safely, another option is to contact an animal behavior specialist to provide expert tips and advice for fostering a compatible relationship between your French Bulldog and cat.

So, Are French Bulldogs Good With Cats?

Just because your French Bulldog gets along well with your cat doesn’t mean they will get along with all other cats. Do you remember the cautious process you initially employed in introducing your cat to your pup? Should you come across a neighbor cat on a walk with your dog, that cat may not be as accepting of your pooch as the cat you so carefully introduced to your pup. Tread carefully.

What Is A Dog Ramp? How It Works, How To Use & The Benefits

As we found in French Bulldogs And Cats – Do They Get Along? the answer isn’t clear-cut. They can as long as you facilitate a healthy relationship. Even if you’ve successfully introduced your cat and French Bulldog, it may not always be rainbows and sunshine. There could be times of discord like in any relationship.

Knowing what to do when things get out of hand is as important as the initial introduction in maintaining a harmonious relationship between your Frenchie and cat.

So the real answer is that it truly comes down to your pets’ personalities and how you manage their behavior. Of utmost importance is that your French Bulldog and Cat are well-supervised during every interaction until you’re 100% certain that the two will interact and live peacefully with each other. But the best tip I can give you is to be patient with your pets and don’t force things.

Calming Dog Beds: All Hype or Not?

The Ultimate Guide To Traveling With Dogs